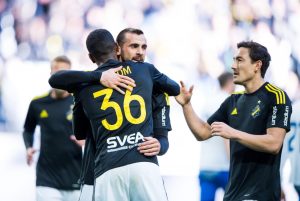 AIK vs Norrkoping Football Betting Tips of the Day

AIK the title champion receives Norrkoping and are in 3rd place, 6 points from Malmo and revalidating the title is a goal that is becoming difficult, separated by 6 points the AIK team can not lose more ground.

AIK: Form of the moment, the latest results, statistics

The men of the house defend the title and are here to play the chase to Malmo who wants to be champion and invested in it, and in this 13th day they are in 3rd place with 24 points, just 6 points from the lead and a victory was left, to the 3 points of the leader.

At home follows with 5 wins after starting with a draw, suffered only 2 goals at home the best defense of the league when they play at home.

The goal that is to win is permanently in the minds of the men of Stockholm and for this very reason I hope they will concentrate after a pause.

Norrkoping: Form of the moment, the latest results, statistics

The visitors, occupying the 7th position already 6 points from the AIK in a fight that is not for the victory in the league although in the season gone second they remain unbeaten in their last 4 games.

Away from home the team in 7 games had 10 points and only lost 1 away game, scoring 10 goals and conceded 9, a team that is synonymous with goals but this time will have an added difficulty in scoring.

This move is very difficult, a very solid defense and where he has not won in the last 5 games.

Our Football Tip AIK vs Norrkoping

I expect a victory of the men of the house, and confirm the approach to the leader Malmo that takes an additional game.