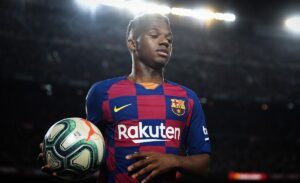 No time to breathe on the other side of the Pyrenees!

While the 30th day ended with the clash between Real Sociedad and Real Madrid this Sunday, the 31st will start this Monday, and will continue on Tuesday with notably the reception of Athletic Bilbao by FC Barcelona at Camp Nou .

At 22h, the Blaugranas will try to chain a 4th game without defeat since the resumption, a 5th since the Clasico lost on 1st mar last (0-2). If in itself, a draw on the lawn of Sevilla FC, 4th, is not a bad result, this non-victory allowed Real Madrid to return to equal points (65), and even to go back to 8 term days. With 24 points still to be taken, everything is far from being played but each draw, each victory could have its importance.

A few hours from getting around Barcelona, ​​Athletic Bilbao is certainly well aware of this. 9th with 42 points, the Basque club is not taken down by the wagon of Europe, Getafe, 5th, having only 6 points in advance, and Villarreal, 7th, only 5. Even if the men of Gaizka Garitano certainly did not check off this match at Camp Nou in order to take points, it would be a good time to achieve an achievement!

Key stats for the match Barcelona vs Athletic Bilbao

Barcelona are uncompromising at home: 14 wins, 1 draw in 15 league games at Camp Nou.
With 47 goals scored and 12 conceded on their lawn, Barça are less than 1 goal conceded per game at Camp Nou and have a goal difference of +35.
As often, Bilbao is much more comfortable at home (8W, 4D, 3L) than outside, where its record is only 2 wins, 8 draws and 5 losses.
Since the recovery, the Blaugranas have played 3 games and have not conceded a single goal: 4-0 in Mallorca, 0-0 in Seville, 2-0 at home against Leganes.
During its last 6 outings in La Liga, FC Barcelona has produced 5 clean sheets.

Before the cut and since the resumption, Barça had tightened the bolts in defense. In the middle of the title fight with Real Madrid and at home against a team that travels badly, the victory without conceding a goal seems interesting to us.