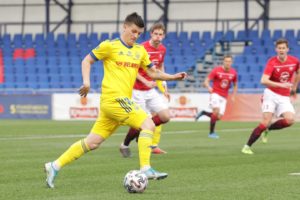 BATE, third in the league, must recover the disadvantage of a remedied goal against Slavia, 13th in the league, in the 1-0 defeat of the first leg, in order to hope to qualify for the Belarusian cup final. BATE, after the short setback in the first race of the semifinal, has conquered 7 of the 9 points available in the last three league games: on the last day it was imposed by 2 to 0 on the Gorodeja field, while previously he drew 0-0 against Zhodino and won 3 to 0 away from FC Minsk. What stands out is the unbeaten defense of Alshevsky’s team which has managed to keep the clean sheet in the last three games. Different trend for the guests of Slavia Mozyr whose last victory dates back to the cup game played against Bate. Since then, in the last three rounds of the championship, Martinovich’s men have first drawn against Rukh Brest (white-netted tie), before losing two games in a row against Isloch Minsk (2-1) and against FC Minsk (1-3). Just four points from the relegation zone, guests currently occupy the fourth last place in the ranking. However, for this cup game they start with the advantage of having won the first leg without conceding a goal. However, Bate’s attacks on the Borisov Arena, which has every intention of reaching the cup final, scheduled for 24 May, will hardly stand up.

The key points of the prediction Bate Borisov vs Slavia Mozyr

To qualify, Bate must score at least two goals without suffering one.

In the past ten home games against Slavia, BATE has won 10 and drawn 2 (in all competitions).

BATE’s last defeat at home against Slavia Mozyr dates back to September 2000.

Bate have not conceded goals from three consecutive games.

Slavia Mozyr have conceded 5 goals in their last two games.

Bate is very favored for victory in this game. The 1 sign is the safest game, but since at least two goals are required to pass the round, it is possible to raise the stakes with the 1 sign with a handicap at 2.05. The Bate who passes the round, however, is at 1.67.