Benfica starts training on May 4th 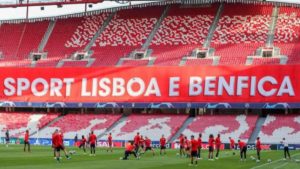 Benfica starts training on May 4th

It was Nacional who started with individual training on the pitch at Estádio da Madeira about three weeks ago, followed by Sporting several days later. Now, it will be Benfica’s turn to return to training at Academia do Seixal in a naturally conditioned way.

EVERYTHING TESTED BEFORE GOING OUT TO THE LAWN

Benfica intends to follow all the recommendations of the General Directorate of Health on returning to training and for that purpose it will start a series of Covid-19 tests to all its players, technical team and their families in order to cut the risks of contagion by social contact that they could derive from it.

That said, the club should resume training in the style of Nacional and Sporting, with division of groups and individualized training on the pitch with virtually no social contact.

In addition, players will have at their disposal the apartments of Caixa Campus do Seixal so they can equip themselves and bathe individually, that is, in a private place where social distance is respected. Naturally, this would not be possible in the changing rooms of the training camp.

Unlike Sporting, which warned its players to come equipped and (let it be known) to bathe in their properties, Benfica offered this interesting alternative that will allow players to equip themselves on the club’s premises and take care of their personal hygiene before to leave the place.

This decision to return to training on 4 May will coincide with the end of the State of Emergency period decreed by the President of the Republic, Marcelo Rebelo de Sousa, so Benfica will also have taken this into account in order to have one more good reason to resume your workouts.

According to the national press, the Portuguese government may declare a state of public calamity after the emergence of a state of emergency, but the restrictive measures should be somewhat eased as of May 2.

But is it too early to return to training? As I defended when I announced the return of Nacional and Sporting, it seems to me that although it may raise some problems of moral conscience, the truth is that the type of training that will be carried out implies small risks to the health of the players and even smaller risks to the public health taking into account that the training will take place in a private environment with little social contact.

As there are still no dates for the return of national competitions, it is accepted that many clubs already start thinking about preparing their teams for what may be coming, especially considering that Portugal has not been one of the countries most affected by the pandemic of the Covid-19.

FOR WHEN TRAINING TOGETHER?

If all elements involved in a joint training are tested for the new coronavirus and subsequently checked regularly, there is a good chance that the authorities can allow such a situation.

BACK TO COMPETITION IS DISCUSSED

In the last week, the possibility of resuming national professional competitions was discussed with some intensity. With matches behind closed doors and measures to control the health of the players well identified, it is believed that it will be possible to conclude the competitions this season.

At the moment, it is difficult to set a specific date for the resumption of national competitions, but it is believed that the month of June may be the ideal time to do so, allowing the season to extend for another two months until mid-August without this will seriously damage the next season.

With the fight for the title in full swing, as well as the accounts of European competitions and relegation, it is normal that many clubs wish to resume the competitions. In the Pro League, Nacional and Farense seemed well off to secure a place in the Liga NOS next season, but clubs like Feirense or Estoril still dreamed of recovery, so the desired scenario would be the conclusion of the seasons within the field.

It seems that the Portuguese Football Federation and League of Clubs are committed to making this possible, although they do not confirm that this will happen as this decision does not depend solely and exclusively on their will, but is also dependent on the Portuguese government and the respective health entities. public.