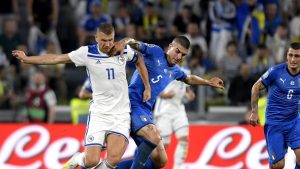 On Friday night, Italy travel to Bosnia and Herzegovina for a qualifying match for Euro 2020. Bosnia has a slim chance to play the Euro while Italy is already qualified and assured to finish first.

Present at the World Cup in 2014, Bosnia failed to qualify either for the Euro 2016, or for the World Cup last year. This year, with 10 points taken in 8 games, Bosnia-Herzegovina is in trouble in this group, in 4th place and especially in 5 points of the 2nd place occupied by Finland. Therefore, she seems to have said goodbye to the qualification. The 48th nation in the Fifa rankings lost big when they lost to Italy (2-0), Finland (2-1) and Armenia last September (4-2). After recovering against Finland in October (4-1), the Bosnians relapsed while losing to Greece (2-1).
Opposite, Italy seeks to redeem itself after its humiliation linked to its non participation at the last World Cup. In this group, Squadra Azzura flies over the debates since she filled up with 8 victories in as many games. After defeating Armenia (1-3) and Finland (1-2) in September, the Transalpines easily won against Greece (2-0) and Liechtenstein (0-5) at the last rally.

Headcount for Bosnia & Herzegovina vs Italy

Redoubtable in this group, Italy will want to make a point of honor to refuel. This passes by a success to the irregular team of Bosnia and Herzegovina.