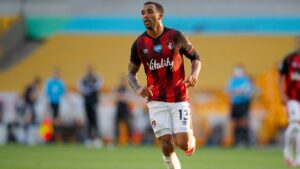 Thursday evening, Bournemouth faces Tottenham for a match on the 34th day of the Premier League. Bournemouth is engaged in the struggle for maintenance while Tottenham still wants to access Europe.

Undoubtedly, the shape of Bournemouth is very disturbing. Already in great difficulty this winter with 3 defeats conceded in the last 4 games before confinement, the Cherries did not take advantage of the break to get back on track, quite the contrary. Indeed, they lost their 4 games disputed since the resumption against Crystal Palace (0-2), Wolwerhampton (1-0), Newcastle (1-4) and Manchester United (5-2) on Saturday. In the standings, Eddie Howe’s men logically find themselves in the red zone, in 19th place, 4 points behind the 17th.
For its part, Tottenham is also tough this year. The finalist in the last Champions League fails to confirm after a last rather successful exercise and now occupies 10th place in the ranking. After taking a point against Manchester United (1-1), the Spurs were rather convincing against West Ham (2-0) before losing on the field of Sheffield (3-1). Monday evening, they resumed their march forward against Everton (1-0) and rose to 8th place in the ranking.

The staff for Bournemouth vs Tottenham

Bournemouth cannot rely on the services of long-time absentee Daniels, potentially full-fledged defenders Stacez, Mepham and Francis who are all in the infirmary. Absent in the last few games, defender Cook is hoped for but remains uncertain, as do replacements Surman and Simpson. The only good news is that Wilson’s top scorer is back from suspension.
On the side of Tottenham, the little used Foyth and Tanganga were joined in the infirmary by the excellent Delle Alli, while the defensive midfielder Eric Dier begins to purge his long suspension for having faced a fan in the stands before the epidemic crisis.

Key points for the match Bournemouth vs Tottenham

Tottenham won in a goal-rich first leg (3-2)
Coaches can make 5 replacements during the game.
This meeting will take place behind closed doors.

Against a team totally on the streets for weeks, Tottenham has a great opportunity to take the three points and get back into the race for the Europa League. Tottenham victory!