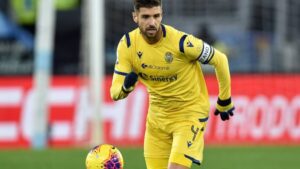 This Sunday, Brescia receives the Hellas Verona on the 30th day of Serie A. Brescia must win to keep a tiny chance of maintenance. Hellas Verona can still believe in a European qualification.

Last in Serie A with only 18 points taken in 29 games and 8 units behind the first non-relegation formation, Brescia is almost condemned to relegation. The red lantern appears well destitute and has not won any of its last 14 league games (9 losses and 5 draws). For their first 2 games played since the resumption of the championship, Sandro Tonali’s partners figured rather well by lining up 2 draws on the lawn of Fiorentina (1-1) and against Genoa (2-2). However, they sank in the den of Inter last Wednesday (6-0).
The Hellas exceeds all expectations for its return to the elite and ranks 8th in the ranking with 3 points behind European places. Very consistent before the season was interrupted, the team has lost only to a solid formation from Naples since the resumption (0-2). Otherwise, the Hellas brought back a good point from Sassuolo (3-3) and won at home against Cagliari (2-1) and Parma last Wednesday (3-2).

The staff for Brescia vs Hellas Verona

For this meeting, the coach of Brescia is deprived of the usual incumbents Chancellor, Bisoli and Cistana as well as goalkeeper n ° 2 Alfonso, all stranded in the infirmary. Mario Balotelli, meanwhile, is still ruled out. The red lantern has the 3rd worst attack and the 2nd poorest defense in the championship.
Hellas Verona has to contend with the defections of the usual substitutes Danzi, Eysseric and Salcedo while the inevitable Pessina midfielder is suspended. On the last day, striker Di Carmine scored his 6th league goal. The team presents the 4th defense of Serie A.

Key points for the match Brescia vs Hellas Verona

In the first leg, Brescia lost to Verona (2-1).
Coaches can make 5 replacements during the game.
This meeting will take place behind closed doors.

When traveling to the Brescia red lantern, Hellas Verona has a great opportunity to take 3 additional points this Sunday. Hellas Verona Victory!