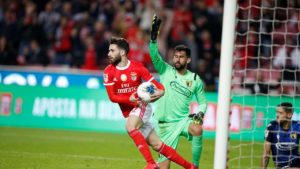 The Famalicão Municipal Stadium is the stage for the second leg of the Portuguese Cup semi-final where the local team, Famalicão, receives Benfica. 1st leg result: Benfica 3-2 Famalicão

Famalicão had a beautiful exhibition at the Estádio da Luz a week ago and I would say that he was on high and extremely confident for this match, but the copious defeat against Vit Guimarães, on the same stage as this match, by a clear 0-7, they certainly shake any team.

That defeat came to increase to 5, the games where the formation of João Pedro Sousa, cannot win, having 3 defeats and 2 draws and where he scored 5 goals and suffered 14!

After having entered the season brilliantly, Famalicão now seems to be declining in performance and even acting as a visitor, the team comes from 1 draw and 2 consecutive defeats for the championship.

Benfica, has been in a similar pitch to that of their opponent, where they have been suffering a lot of goals (conceded 7 goals in 3 matches) and also comes from a defeat that leaves marks, in this case, the defeat of the reds at Estádio do Dragão against FC Porto, reduced the advantage of the eagles from 7 to just 4 points in the championship in relation to the blues and whites.

But if in relation to Famalicão, they have this aspect in common, the results of Bruno Lage’s team, have not suffered much from it, where the permeability demonstrated in the last matches, only suffered 1 defeat in the last 18 matches for all competitions.

On the field, 2 teams will be shaken by the results suffered in the last round of the NOS league, results that leave their mark, but this is a different competition and the decisive game of Jamor is a small step away from these 2 emblems.

Having said that, I believe that both Famalicão and Benfica will want to make forgetting the setbacks suffered with the joy of being able to dispute a trophy at the National Stadium, at the Cup party.

Famalicão, starting at the disadvantage of the 1st leg, know that they have to score goals, so I believe that the search for it, can be done from the first whistle, which will make the game very open and with the quality that both teams have, I can only expect a game with goals.