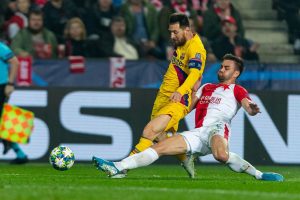 This Tuesday, Barcelona receives Slavia Prague as part of the fourth day of group F of the Champions League. Barcelona wants to stay ahead as Slavia Prague hopes to bring back its first success.

Not really convincing since the start of this Champions League, Barcelona is still the head of Group F with 7 points on the clock. During the first day, the Blaugranas were shaken in Dortmund but they still managed to preserve the point of the draw (0-0). Subsequently, on the smallest margin each time they beat Inter (2-1) and Slavia Prague (1-2). The Catalan formation is also 1st of its championship and counts the same number of points as its nearest pursuer. Last weekend, Leo Messi’s partners were surprised at Levante (3-1). This setback put an end to a nice series of 5 ranked wins in La Liga.

As expected even before starting this group stage, Slavia Prague is in the 4th place with 3 units behind the 2nd. Present in an extremely high sled, Slavia started the competition well by bringing back a precious point of their move on the turf of Inter (1-1). Subsequently, the team lost to Dortmund (0-2) and Barcelona (1-2). Dominating on the national scene, the Czechs prance at the head of their domestic championship with a superb record of 13 wins and 2 draws. Last weekend, they had no trouble defeating at home, Otsrava (4-0), thus signing a seventh success of rank.

The staff for FC Barcelona vs Slavia Prague

Unsurprisingly, the French defender Umtiti is still injured on the Barcelona side. He was joined this weekend in the infirmary by the center forward Suarez, touched on a calf. For his part, Dembélé could return to the group after being set aside against Levante. Finally, Griezmann found a place of titular but the former Madrilenian seems to have difficulty integrating into this Barcelona team and was again silent this weekend.
As for Slavia Prague, only the important middle Traore is still subject to injury and will miss this part. In the last league match, midfielder Soucek scored twice and scored his 6th and 7th goals of the season in the Czech Liga.Advantage Barcelona on paper

The compositions for FC Barcelona vs Slavia Prague

The history of confrontations FC Barcelona vs Slavia Prague

Before the first leg where Barça won (1-2), the roads of these two clubs have never crossed.

Key points for the match FC Barcelona vs Slavia Prague

– Barcelona remains on a defeat and must react.
– Slavia have caused problems for Barça in the first leg, but it should be more complicated at Camp Nou.
– Barça can count on Messi.

Despite its chronic difficulties in the game since the beginning of the season, Barça should not miss the opportunity to obtain a new success in this group. Victory of Barcelona