In Brasileiro Serie A 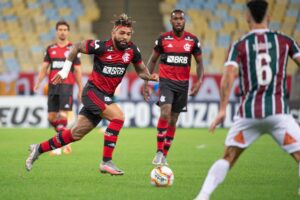 On the night of Wednesday to Thursday, Fluminense meets Flamengo on the occasion of the 9th day of the Brazilian championship. Fluminense is aiming for a place on the podium just like Flamengo.

Fourteenth the previous season, a relatively disappointing place for a team with ambitions, Fluminense has made a decent start this year. Indeed, the tricolor formation is currently 8th after 8 days with 11 points and a negative goal difference of -1. After two great victories at Atlético PR (1-0) and at home when receiving Vasco de Gama (2-1), Fluminense conceded the points sharing against Goianense (1-1) and lost on the lawn of Sao Paulo (1-3) last weekend.

For its part, Flamengo is the reigning champion and winner of the Copa Libertadores 2019. Worn by high quality players like Barbosa, Pedro or even Arrascaeta, the formation of the Mengao is probably the best of the entire American continent. However, Flamengo is only 5th at the moment and pays for its failed start to the season with two defeats against Mineiro and Goianense. But since then, the champion has set the sights. Like the last 3 victories against Santos (1-0), Bahia (5-3) and Fortaleza (2-1).

The workforce for Fluminense vs Flamengo

For Fluminense, Fred, the former OL striker will be absent from this team, as will Barcelos, Muriel (titular goalkeeper) and Frazan. Suspended in the last game, holders Hudson and Evanilson will be back. Former PSG Nene is the club’s top scorer with 3 goals.

On the visitors side, Flamengo recovers its stars Gabigol (ex-Inter) and Gerson (ex-Roma) as in the last match, but not its two goalkeepers Diego Alves (ex-Valence, holder) and replacing Cesar who has the coronavirus. Young defender Joao Lucas and important striker Bruno Henrique are also likely to be forfeited. Gabigol is the club’s top scorer (4) while players known to the general European public such as Thiago Maia (ex-Lille), Isla (ex-Fenerbhace), or Felipe Luis (ex Atlético Madrid) are pillars of this team. .

Key points for the match Fluminense vs Flamengo

The meeting will take place with a limited number of spectators.
Coaches have the possibility of making 5 substitutions during the game.

Impressive in recent days, the formation of Flamengo should be able to come to impose on the lawn of a formation of Fluminense too irregular which has just lost its last match. Flamengo victory!