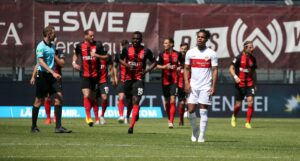 Sunday, Kiel receives Stuttgart as part of the 27th day of Bundesliga 2. Holstein Kiel wants to resume his march forward. Stuttgart battle for the climb.

Kiel is currently 8th in Bundesliga 2 and has 7 points ahead of the red zone and 10 points behind the podium. The end of the season promises to be rather quiet for this team which remains on a series in progress of 4 games without a win (2 defeats and 2 draws). Last weekend, Kiel brought back a point from his trip on the lawn of Regensburg (2-2).
Relegated from the Bundesliga last year, Stuttgart aims to immediately find the elite. The VFB rather meets expectations until now and occupies the 3rd place of the classification, qualifying for the jump-offs, with 4 points ahead of the 4th. Unable to win in the last 2 games before the interruption of the championship (1 defeat and 1 draw), Mario Gomez’s partners resumed competition last weekend by losing to the poorly ranked Wehen (2 -1).

The staff for Holstein Kiel vs VfB Stuttgart

For Kiel, the young Neumann (side), Ozcan (middle), Baku (winger), Serra and Iyoha (attackers), all 22, are among the executives this season in the league. South Korean playmaker Jae-sung Lee (27, 9 league goals) remains the best player on this team. However, the top scorer Serra is forfeited for this recovery.
For Stuttgart, several executives remained at the club despite the descent. This is the case of defender Kempf, midfielder Castro and former Bayern player Mario Gomez. With 6 goals scored since the start of the season, he is currently the 2nd top scorer for his team, just behind Argentinian Gonzalez. Also note the presence of the former Paris FC, the young Congolese striker Wamangituka. On the other hand, the international Croatian hopes Sosa, and the very young Egloff and Awoudja are unavailable, injured.

Key point for the match Holstein Kiel vs VfB Stuttgart

In the first leg, Kiel won in Stuttgart (0-1).
The match will take place behind closed doors.

We see Stuttgart resuming its march forward by winning in Kiel this weekend. Victory Stuttgart