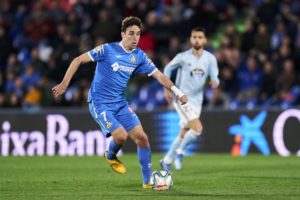 This Thursday, Inter receives Getafe during the round of 16 first leg of the Europa League. Both teams want to keep all of their chances of qualifying before the return match.

Present in group F of the Champions League, Inter was transferred to this Europa League after finishing in 3rd place behind Barcelona and Dortmund but ahead of Slavia Prague. In the 16th finals, the Milan team upheld the hierarchy by dismissing the Bulgarians from Ludogorets (wins 0-2 away and 2-1 at home). In the league, the Nerazzurri are currently 3rd in Serie A and concede 9 units behind 1st place. They carried out very bad operations by losing their last 2 games played on the lawns of Lazio Rome (2-1) and Juventus last weekend (2-0).
In order to qualify for the knockout matches, Getafe figured well during the group stage to take 2nd place in group C, behind Basel and ahead of Krasnodar and Trabzonspor. In the previous round, the team based in the Madrid suburbs created a nice surprise by eliminating Ajax (2-0 victory at home and 2-1 defeat away). In line with their great last season, Mauro Arrambarri’s partners occupy 4th place in Liga and can therefore dream of qualifying for the next Champions League. After having aligned 2 setbacks in a row (Barcelona and Sevilla FC), they imposed themselves on the relegation Mallorca (0-1) before conceding, at home, the sharing of points against Celta Vigo last weekend (0- 0).

The staff for Inter vs Getafe

For Inter, the winter recruit Victor Moses (ex Inter) and the potential middle Sensi are stranded in the infirmary. For this round of 16 first leg of the Europa League, Antonio Conte should align his typical team with in particular the offensive duo composed of Lautaro Martinez and Lukaku.
On the side of Getafe, the substitutes Manojlovic and Timor and the long-time absentee Antunes are unavailable for this meeting, injured. Like the previous round, Mata and Deyverson should be associated in attack.

In front of its tifosi, Inter has the assets to dominate a Getafe formation less accustomed to these major European events. Inter Victory