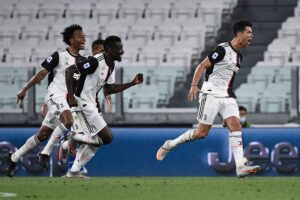 Saturday, the 38th day of Serie A offers us a very nice poster between Juventus and Roma. Juventus are already champions while Roma secured their 5th place on Wednesday night.

With 83 points taken during the 37 days of the championship, Juventus logically won a new Scudetto despite a mixed start to the season. But the Piedmontese were able to get back in the saddle to find a level more suited to their status in the months that followed. However, the Old Lady has not been reassuring in recent weeks. Indeed, it has only achieved 2 successes in the last 7 days. Winners of Lazio (2-1), the Turinese bowed to Udinese (2-1) before validating their title by winning against Sampdoria last Sunday (2-0). Finally, they were surprised Wednesday night against Cagliari and conceded their 6th defeat of the season, which had not happened for almost 10 years.
For its part, Roma did not have a season that will go down in history. Never really in the game to try to follow the 4 leading teams in this Serie A which are Juventus, Inter, Atalanta and Lazio. However, the Louve club did what it took to secure its 5th place, especially in recent weeks. The Romans are indeed in great shape since they have just won 6 times in the last 7 days. Since their last draw conceded against Inter (2-2), they have negotiated their confrontations against SPAL (1-6), Fiorentina (2-1) and Torino (2-3).

The workforce for Juventus Turin vs Roma

Juventus still have to deal with the defections of Argentina’s Dybala and important De Sciglio, Douglas Costa and Sami Khedira. Suspended Tuesday evening the French medium Rabiot will be back. Absent in the last match, captains Chiellini and De Ligt are hoped for.
Apart from the excellent playmaker Pellegrini who is in the infirmary, the entire Roma workforce should be available for this meeting. On Wednesday, the eternal Bosnian Dzeko scored his 16th goal of the season.

Key points for the match Juventus Turin vs Roma

Juventus struggled to win on Roma pitch in the first leg (1-2)
Coaches have the possibility of making 5 substitutions during the game.
This meeting will take place behind closed doors.

Juventus has been less successful for a while, unlike Roma who are in excellent shape. Also, the Romans could bring back at least one point of this displacement. Draw or win for Roma!