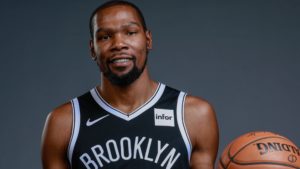 North American basketball has been experiencing some adventures with the new pandemic, starting with the case of Rudy Gobert from Utah Jazz, who made a joke of himself and ended up being the first to be positive in the entire league. But Kevin Durant didn’t escape or play this season either …
Strong spread is taken for granted

The transmission of the Covid-19 from person to person is now a strong reality and this has become more visible with the NBA’s Brooklyn Nets team who recently announced that they had four players who tested positive.

One of them has already confirmed it on social media and he is one of the biggest stars in the league, Kevin Durant. Interestingly, the Golden State Warriors champion has not played in any game this season and it would not be easy to contract this virus, however, simple contact with his teammates will have been enough.

This serves to illustrate that we do not need to expose ourselves too much to contract Covid-19, thus reinforcing the idea of ​​the strong contagion capacity of the same that should serve as a warning. The NBA has been suspended for more than a week, and the cases have since followed. At the moment, players from three different teams are already infected and those numbers may continue to rise in the coming days.

Ills that come for Durant well?

It may be ironic and even cruel to say it, but the truth is that this suspension in the American basketball league gives Kevin Durant additional time to continue his physical recovery after surgery at the end of last season.

The player has already commented on social networks that he does not feel any symptoms and that he is in perfect condition, so who knows if this situation will not contribute so that he can still help his team for two months from now if the season is really being postponed until there.

He is a player of choice who, together with Kyrie Irving arrived in the Nets to pursue the NBA title, however, both are in serious trouble with what has kept them out of the competition. Irving played several games this season, but ended the season prematurely because of a problem in his right shoulder that required an arthroscopy.

Kevin Durant has yet to take action this season due to an Achilles tendon injury that forced him to a long period of recovery. The player has been performing specific training on the court and even seems to be in an advanced period of his recovery, however, the Nets team has already agreed with the player that it is better to only return to the competition next season.

Does the idea remain the same given the current moment? With the competition suspended for another month, he can start dreaming of an early return. The Nets are currently in the 7th position of the Eastern Conference and must guarantee a place in the playoffs, something that the sensational American player can try …

As it has been propagated by the authorities and the media, this virus is not lethal for young people and in good physical condition, but it can prove fatal for people with limited or advanced age.

One of the infected on the Utah Jazz team, Donovan Mitchell, referred to this virus as particularly frightening because of the absence of symptoms. In a way, the fact that people can resist it relatively easily can motivate them to make their lives normal.

Even so, this idea can prove to be harmful to society due to its rapid contagion that can extend to more vulnerable family or friends, and thus lead to lethal consequences for human life.

When there are no symptoms or we do not even know that we are infected, it is natural for us to be a little more frivolous in our care, and that is what can contribute to the strong spread of this worldwide pandemic.

So, regardless of the presence or absence of symptoms, the authorities continue to urge people to remain at home and reduce their social contact as much as possible in order to contain this rampant contagion that we have all seen around the world.

No one seems immune to the virus, and even those who can overcome it without difficulty, need to be socially aware so as not to infect loved ones or co-workers who may be more vulnerable to the new coronavirus.