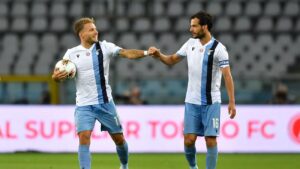 Lecce vs Lazio are playing in the round with number 31 in Serie A. The hosts are in the relegation place and need points, while the guests, after the 0-3 defeat with Milan, at home, practically left the race for the title.

He has six defeats in a row and has conceded at least four goals in five of those games. Nothing surprising for the team with the weakest defense.
Lecce has an average of 2.33 goals conceded and received 32 goals in home games, with which it occupies the first place in an unwanted top of the league.
The guests scored first in 12 of his home matches, which means 80% of the matches played this season in their own fief.

The absences of the best scorers were felt in the match with Milan, and Lazio gave up for the second time since the resumption of the competition. The 6 points lost in this game and in the one with Atalanta shattered his chances for the title.
It was only the second failure in 25 matches played since September. So the team is expected to recover, at least for pride.
Lazio has won 3 of the last 4 away matches and in the last 3 games opened the score in the first 10 minutes. If he does it again it is possible to witness that 2+ in the first half.

Lecce needs success and is expected to grasp this chance with their teeth. I will go on goal scored by the hosts, odds 1.51. For the big odds I will try 2+ first half.