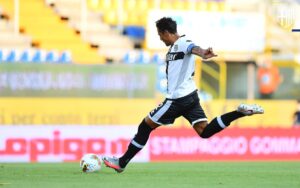 On Sunday, Lecce will face Parma for a meeting of the 38th and the final day of Serie A. Lecce can still hope to maintain itself while Parma has nothing to hope for from this meeting.

Back in Serie A after 8 seasons spent at the lower level, Lecce has not managed to appear very well in this championship and is, on the eve of the last day, in the red zone of the standings. However, the promoted have started to believe in the maintenance since they are only one point behind the 17th, the Genoa after having won 2 wins in the last 3 days. After defeating Brescia (3-1), they lost to Bologna (3-2) then they kept hope by taking the 3 points against Udinese (1-2) on Wednesday night.
For its part, Parma is well established in the soft underbelly of the classification, in 11th place in the classification. Capable of both the best and the worst, I Gialloblu was unable to join the race for Europe. Lately, he had made a big blow by dropping Naples (2-1) then Brescia (1-2). But Tuesday night, he lost to Atalanta (1-2).

The workforce for Lecce vs Parma Calcio 1913

For Lecce, potentially titular defenders Rossettini, Calderoni, and attacking players Farias and Khouma Babacar are uncertain. Midfielder Deiola is already forfeited while the framework defender will return from suspension. The captain of this team, Marco Mancosu, carries his team at arm’s length and he scored the 14th goal of his season on Wednesday night.
In Parma, the important Grassi, Brugman, and Scozzarella and the top scorer Cornelius (ex Bordeaux) will not be on the trip.

Key points for the match Lecce vs Parma Calcio 1913

Parma had outclassed Lecce (2-0) in the first leg.
Coaches have the possibility of making 5 substitutions during the game.
This meeting will take place behind closed doors.

Lecce is fighting with rage in his stomach and the promoted could win to hope to maintain. Victory Lecce!