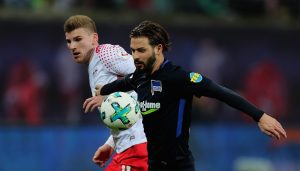 Leipzig and Hertha apparently come to the challenge in moments of opposite form: the first; third, they have not lost in the Bundesliga for more than two months (away from home against Borussia Dortmund) and, just 3 points from the fifth Eintracht, they are in full swing for the direct qualification in the Champions League. The Berliners, on the other hand, sail tenths at mid-table when the championship starts at the final stage. Rankings, motivations and the quality of the two roses suggest the victory of the red and white players at home; however the break for the national teams often changes the cards on the table and the outcome of the challenge will depend largely on the form of the players called up for international competitions, on all the Swedish Forsberg (RB Leipzig) and the Slovak Duda (Hertha Berlin).

The key points of the prediction Leipzig vs Hertha Berlin

The consecutive useful results (open series) of the RB Leipzig in the Bundesliga, the result of 6 wins and 3 draws;

Goals conceded by RB Leipzig, the best defense in the league;

The penalties granted by Hertha in the league so far, second only to Hanover. 4 those granted by the RB Leipzig.

If an RB Leipzig victory appears almost obvious (at 1.44), the win with a goal handicap is the less so.