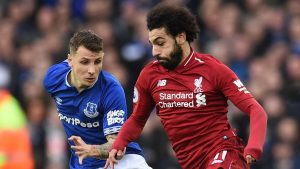 This Wednesday, Liverpool receives Everton on the occasion of the 15th day of Premier League. Both teams will be keen to win this Mersey derby.

The only team yet undefeated in the league (13 wins and 1 draw), Liverpool is leading the Premier League with 8 points ahead of its nearest rival. The Mersey club is well on their way to being crowned champion of England, a title they have missed since 1990. Since sharing points conceded in the den of Manchester United (1-1), the Reds have won against Tottenham (2-1), Aston Villa (1-2), Manchester City (3-1), Crystal Palace (1-2) and Brighton last weekend (2-1).
Everton is one of the big disappointments of this beginning of the season and is only 17th in the Premier League with 2 points clear of the relegation zone. After posting a slight jolt just before the truce in November with a good draw at home against Tottenham (1-1) and a victory won at reluctant Southampton (1-2), the Toffees fell back in their wake by making themselves surprise, at home, by the promoted and misclassified Norwich (0-2). Last weekend, they logically lost to Leicester (2-1).

The staff for Liverpool vs Everton

On the Liverpool side, Matip and Fabinho executives fill the infirmary’s ranks with substitute side Clyne. Meanwhile, No. 1 goaltender Alisson is suspended after receiving a red card last weekend.
For this derby, Everton coach has to deal with the injuries of the experienced Delph and Walcott, the usual holders Gbamin and Andre Gomes and the replacement Martina. The Irish international side Coleman is uncertain. Despite a certain offensive potential on the paper, the team has the 4th worst attack of the Premier League.

Liverpool has not lost a Mersey derby at Anfield since 1999.

Unsurprisingly, Liverpool should win the Mersey derby at Anfield on Wednesday.