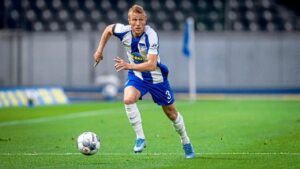 It smells good for Mönchengladbach in his quest for the Champions League. Before playing this last day, Borussia is in 4th position with 2 points ahead of Bayer Leverkusen and a much higher goal difference. However, the Foals had lost big by losing against Freiburg (0-1) then Bayern Munich (2-1). But Marcus Thuram’s teammates recovered well by winning in front of Wolfsburg (3-0) then in front of Paderborn last week (1-3) and therefore have their destiny in hand.
For its part, Hertha Berlin is preparing to end a mixed season. Very disappointing during the first half of the exercise to the point of fear for its maintenance, the club of the capital has finally revived well to offer a fairly comfortable maintenance. Defeated 3 times by Dortmund (1-0), Frankfurt (1-4) and Friborg (2-1), the players of Bruno Labbadia finally found a smile by winning in front of Bayer Leverkusen (2-0) on Last weekend.

The staff for M Gladbach vs Hertha Berlin

Borussia will have to finish the season its important Zakaria, replacing Raffael, experienced Johnson and Strobl and their star strikers Thuram and Pléa who are all out of shape. On the other hand, the titular defender Elvedi has served his suspension and will be able to play again. In the absence of the two French, the midfielder Hofmann ensures the interim very well and has scored 3 goals in the last 2 games.
Hertha Berlin is decimated for this match. Indeed the important Wolf, Skjelbred, Dilrosun and Mittelstädt as well as the replacements Samardzic, Maier, Kraft, Leckie and Ascibar are all missing on the side of the Hertha. In addition, the Ivorian Salomon Kalou is still sidelined by his club after deriding the health measures taken because of the Covid-19 and the defender Klünter is suspended for this meeting.

Key points for the match M Gladbach vs Hertha Berlin

The two teams left back to back in the first leg (0-0).
The match will take place behind closed doors.
Coaches can make 5 replacements during the game.