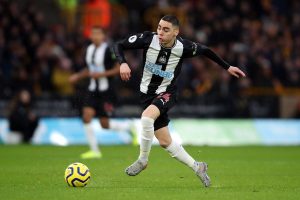 In a difficult phase of their season, Newcastle comes for this match looking to correct what was a waste of the match about a week and a half ago during the visit to the Crown Oil Arena.

The run of five straight games without a win, where the magpies lost in three Premier League games, can be helped to justify the long list of injuries Steve Bruce has to deal with these days.
Still, last Saturday, Newcastle managed to win a taste of victory on Wolverhampton’s difficult 1-1 trip to the field in a game that served to break the losing streak in the English Premier League, where the team have played a Interesting route.

Losing most of the game in the home match of this FA Cup 3rd round,

Rochdale, who plays in League One, achieved an excellent result and reaction as they drew in the last quarter of the match against an ‘almighty’ Premier League opponent.

While not having a major campaign in his league (18th place with 28 potnos in 25 games and only six points down),

Brian Barry-Murphy’s team arrives morally at this game in St. James’ Park, not only because they won’t have any pressure on their side, but also because, after last Saturday’s win against Bolton (2-0), they scored their third straight game without a defeat.

Newcastle’s superiority in the first match of this round was evident and Steve Bruce’s team were forced to repeat the home battle only because of their obvious ineffectiveness at the time of submission.

Now with their supporters mostly in the stands, a new dominance of the magpies is foreseen, in a match where the difficulty must once again pass through the defensive wall that the Rochdale will impose.

Nevertheless, the individual quality of Newcastle’s attack should be enough to beat a team that has conceded 41 goals in 25 League One games.