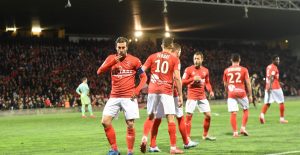 Wednesday evening, Dijon moves to Nîmes within the framework of a meeting of the 23rd day of Ligue 2. Nîmes wants to fill the gap which separates it from Dijon which, for its part, intends to accentuate it.

It is complicated for Nîmes. Promoted last year in Ligue 1, the Gardists had made a good first exercise in the elite but it is much more delicate. Indeed, the Crocodiles are only 19th in the classification and they are 6 lengths behind the first non-relegation. After losing 3 consecutive games against Rennes (0-1), Dijon in the Coupe de France (5-0) and Saint-Etienne, they benefited from their numerical superiority against Monaco (11 vs 9) to win themselves on Saturday evening (3-1).
For its part, Dijon is 17th and first non-relegable in this Ligue 1. But from an accounting point of view, the Burgundians have a good mattress of 5 points ahead of the Amiens barragiste. Rather interesting since January, Stéphane Jobard’s men beat Lille (1-0) before losing to Montpellier (2-1). Difficult Limonest winners in the French Cup (1-2 AP), they made a very good operation by outclassing Brest last Saturday (3-0).

The staff for Nimes vs Dijon

For Nîmes, the striker Despres, the right back Alakouch, the prolific Ripart, the promising Valerio and the defender of the Briançon defense remain unavailable.
Dijon will still be deprived of striker Chouiar and the important Aguerd and Sammaritano. On the other hand, the rookie Benzia could make his debut with his new club. Facing Brest, Mama Baldé scored twice.

Probable compositions for Nîmes vs Dijon:

There was no winner in the first leg (0-0) but Dijon easily won the Coupe de France last month (5-0).
Dijon have won 5 of their last 6 games.

No doubt a little more consistent than his opponent of the day, Dijon could come to defend in order to preserve his lead in the standings and bring back at least one point from this opposition.