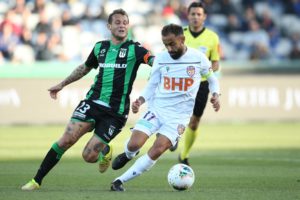 Perth Glory Perth Glory plays good football, they are a team that never hides from the game likes to play a leading role even against the strongest teams. They are having a good championship and occupy a Play Off spot. They want to stay until the end and due to the quality of the game they present, they are strong candidates.

In the last matchday, they scored a point at the home of Sydney who leads the competition and the game was divided with Perth Glory having practically the same goal opportunities as Sydney in that game.

So now it’s up to them to have even more prominence in this game not only because they play at home but because they are very favorites to win here.

Western United Western Union is fighting for Play Off just like Perth but has a much more shaky place. They discuss the last access wave with 2 or 3 more teams that are relatively close.

Western Union is also an attacking team but has less quality than Perth and fewer players with the capacity and individual quality to make a difference. They are confident in this important game because they have won 2 goals in the last two games.

This game will have different game characteristics and a much higher level of difficulty than those that Western United had in the last games, so I don’t think they can escape this game.

Tip: I go dry and confidently at Perth Glory. Better team, better players, more ability to make a difference in individual plays, home factor and a direct opponent that forces Perth to win and score in this league.

It is true that Western United comes to this game with high confidence due to the victories they have achieved, but in Perth they will have difficulties because the home team has more criteria to define and has more quality in almost all aspects.

It is not an extraordinary odd for Peth, not least because the odd has been falling. The market has realized that there is a lot of value on the home team side and I go to them dry to win the game.