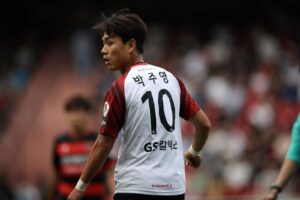 Football is gradually regaining its rights all over the world!

While Belarus has resumed its rights as if nothing had happened at the end of March and that Germany has just relaunched its competitions, South Korea has also taken the decision to relaunch its K-League 1 on May 8. On the program this Friday at Steelyard Stadium, Pohang will host FC Seoul on behalf of the 3rd day.

In the first 2 games, the Steelers managed to take 4 points out of 6 possible and seem to confirm their status as a good South Korean club. Last season, Pohang had indeed finished 5th in the regular season with 48 points and therefore took part in the Play-Offs for the title or a place in the Asian Champions League.

This was also the case for FC Seoul, 3rd after 33 days in 2019 and qualified in extremis for the preliminary round of the AFC Champions League, in the face and the beard of its opponent of the day, Pohang. This season, the club of the capital knew a victory and a defeat and thus points in the middle of the table.

Key stats for the match Pohang Steelers vs Seoul FC

Seoul confirmed its difficulties outside by losing to the sixth in the last season, Gangwon, on the first day. Pohang won in his first game and is rather strong at home: Pohang Steelers wins the match!