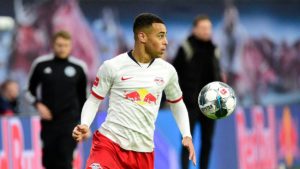 Accustomed to playing at the top of the table since his arrival in the Bundesliga in 2016, Leipzig is on track to try to fight to the end for the title this season. Indeed, after 21 days disputed, the Red Bulls are 2nd in the classification with only one point of delay on Bayern. After having started badly the year 2020 with a defeat against Eintracht Frankfurt (2-1) and a draw against Borussia Mönchengladbach (2-2), Christopher Nkunku’s partners lost again against Frankfurt in the Cup (3-1). On the other hand, they went to seek a point on the ground of Bayern last week (0-0).
For its part, Werder Bremen continues to tumble this season. Week after week, the Werderaners accumulate defeats and have lost 7 times in the last 8 days. Since their last victory against Fortuna Düsseldorf (0-1), Hoffenheim (0-3), Augsburg (2-1) and Union Berlin (0-2) have beaten them. Also, the Werder is in 17th place, with 4 points behind the first non-relegation.

The staff for RB Leipzig vs Werder Bremen

Leipzig still cannot count on important defenders Kampl, Konate and Orban. In attack, Werner has already scored 20 goals since the start of the season.
Werder Bremen remains deprived of the important Augustinsson, Gebre Selassie, Fullkrug and Barfrede and the replacement Mohwald, all stranded in the infirmary.

On the outward leg, the Werder lost widely at home (0-3).

Faced with a Werder team in total pain, Leipzig should be able to return to success in this game.