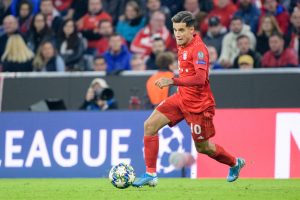 Red Star vs Bayern proposes a guest team already qualified in the next round and a Serbian team that is likely to go further in the UEFA Europa League. And this even in the conditions in which he lost in the score against Bayern and in double with Tottenham. The success with Olympiakos keeps them still in the race until the return with the Greeks.

Red Star wants to take third place in the group

The Serbs lost 3-0 in the tourney match, and against Spurs they gave up 5-0 at London and 4-0 at home.
In the domestic championship it goes very well. He is a leader, even though he lost the traditional derby with Partizan, 0-2, and has a seven point lead in front of the 2nd place team, Vojvodina Novi Sad.
Has only 4 wins in the last 20 matches in the European Cups (8 draws and 8 draws).

Bayern Munich is qualified in the best competition

The Bavarians seem to have recovered from the crisis. He has an excellent series with the interim Hans-Dieter Flick, managing three successes in a row without receiving a goal, including that 4-0 with Dortmund.
Has 6 wins in the last 7 matches. He lost only to Eintracht (1-5), the defeat which led to the dismissal of Niko Kovac. In the meantime, he is at one point with the leader Monchengladbach.
He has not lost in the last 11 away matches in the European Cups, managing 8 wins and 3 draws.

No doubt that Bayern already qualified has no emotions in this match. But he doesn’t even surrender. I anticipate a game that will eventually win and in which we do not have a river score. I go on at least two goals in the second half and 4-6 goals in the match.