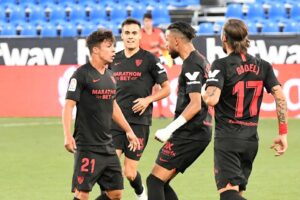 Sevilla and Eibar face each other this Monday night, regarding round 34 of La Liga.

Sevilla remains in 4th position in the Spanish league with 57 points won, with 15 wins, 12 draws and 6 losses. His goal metric has 48 goals scored and 33 conceded, with an average of 2.5 goals per game.

Their home performance has been positive, with 7 wins in 16 matches at Sanchez Pizjuán. In the last round, they registered a 3-0 victory against Leganés.

Eibar occupies the 17th position in the league table with 35 points won, with 9 wins, 8 draws and 16 losses.

Regarding goals, he has 34 goals scored and 50 conceded, with an average of 2.5 goals per game.

His performance away from home has been the least productive, with 2 wins in the 16 trips made. In the last round, they registered a 2-0 defeat against Osasuna.

I believe that we can explore here the winning market in favor of Sevilla. It is true that Eibar has not yet secured their stay but is 6 points above the waterline, unlike Sevilla, which will have a more decisive game here.

With Villarreal biting his heels, the Andalusian side has an excellent opportunity here to cement its position as Champions League, knowing that it also has an advantage in terms of form.

It is necessary to go back until January to see the last defeat of the Lopetegui team, and it should be remembered that Eibar only managed to win 2 of the 16 trips made for the championship.

It is not the most interesting odd, but Sevilla has all the conditions to add 3 more points with greater or lesser difficulty.