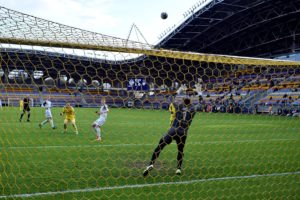 In the next round of the Belarusian championship, Shakhtyor Soligorsk hosts Slutsk on the fifth day of the Vysshaya Liga. The hosts currently occupy the twelfth position at 5 points, the result of a victory and two draws. The beginning of the season for Shakhtyor did not start in the best way as the debut was marked by a defeat against Zhodino. Less bitter defeat, however, if you think that Zhodino is currently leading the championship standings and that after this first misstep a victory and two draws have come. A sore point for the team coached by Vernydub is the goal: in four games, in fact, Shakhtyor scored only two goals, both in the victory on the second day against Gorodeja. The last two games ended in a white net draw, interspersed with the defeat against Dinamo Brest in the cup. Even on that occasion, no goal for Gutor and his companions. There are therefore three games in which Shakhtyor fails to score.

For their part, the guests of FC Slutsk find themselves in third place in the standings, with a rather positive start to the season: two wins, a draw and a defeat are the results of the team coached by Pavlov in this season start after just four days. The only defeat came in the home game against Dinamo Brest, while on the last day Slutsk only got a draw against Vitebsk for 1 to 1. Two Over and two Under in the four games played, with seven goals active (3-1 victory on the first day, a 1-0 defeat, another 3-2 away win over the Island Minsk and finally the 1-1 draw on the last day). Constancy does not seem to be part, for now, of the Slutsk trend that the books do not give a very favorite for this meeting.

The key points of the prediction Shakhtyor Salihorsk vs FC Slutsk

Shakhtyor’s last two games have both ended without goals.

Two of the last three games in the FC Slutsk league have scored less than 2.5 goals.

The Shakhtyor lately has struggled to find the way of the net and despite this the books give him as a favorite for the victory. However, given that there is no lack of surprises in this championship, it is better to rely on an Under 2.5 that in the last matches of both teams has occurred with a certain consistency.