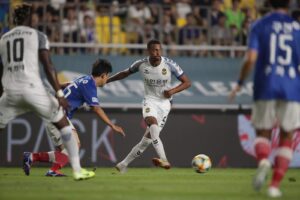 On Saturday, the Suwon Bluewings host Incheon United for a meeting on the third day of the South Korean championship. The Bluewings must react after their first two losses while Icheon United will want to glean a first success.

Last year, Suwon did not show itself particularly to his advantage by winning 8th place in the ranking (out of 12) with a total of 48 points. A final classification largely compensated by the Cup victory in November which allowed him to participate in the Asian Champions League where he was defeated by Vissel Kobe (0-1) and Johor FC (2-1) . Also in the championship, the Bluewings started badly. Not spared by the calendar, they were beaten by the 2nd of last year, Jeonbuk (1-0) then by the champion, Incheon United (2-3).
For its part, Incheon United was very hot last year, finishing in 11th place (out of 12). It was only thanks to his good performances in the relegation group that the club managed to obtain his retention. To restart the competition, the team drew against Daegu FC (0-0) and then against Seongnam last week (0-0).

The staff for Suwon Bluewings vs Incheon United

The Suwon Bluewings can always count on their executives: international defender Hong Chul, Canadian international Doneil Henry (ex West Ham) and the formidable Australian striker Adam Taggart, who found the net 20 times last year . For his debut with his new club, the Bosnian Krpic distinguished himself by scoring last week. Suspended last week, Australian midfielder Antonis is expected to return.
For d’Incheon, the main threat is the Montenegrin international Mugosa who has scored 19 and 14 goals in the last two years but has not been able to find his way like any of his partners yet. He should be associated with Nigerian striker Lanre Kehinde (ex Denizlispor) recruited this winter.

Key point for the match Suwon Bluewings vs Incheon United

The match will take place behind closed doors.

These two teams could be content to take a point in this meeting which could be quite closed. Draw