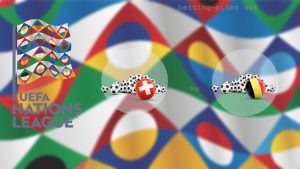 Belgium move to Switzerland to face Switzerland in the decisive challenge of group 2 of the League of Nations A. The Belgians have 9 points, the result of 3 wins in as many games, while the Swiss have 6. Last place , already relegated, is Iceland with 0 points. In the first round the golden generation of Belgium beat Switzerland 2-1 at home and now a draw comes to the Red Devils to qualify for the next phase. In the last two encounters Belgium won 2-1 and Mertens, the Hazard brothers and still Batshuayi, the scorer of two unanswered goals against Icelanders. Also note that Courtois only conceded 1 goal in this competition.

The highest quality and talent of the Belgian gold generation.
Switzerland have lost the last two duels with Belgium.
A draw is enough for the Belgians to hurry.
Belgium conceded only 1 goal in this competition.
In the first lap Belgium won 2-1.

Go to Switzerland vs Belgium live center for more info

We expect a bit of a balance, as Switzerland play at home, but with Belgium highly concentrated and committed to moving forward in the competition. Bet the visiting team does not lose and qualify.