Tour de France only at the end of August 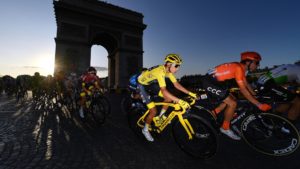 Tour de France only at the end of August

The decision made yesterday by the organization of the most important cycling event on the planet was relatively expected given that the French government had already announced the suspension of all large-scale events until mid-July.

PLAY FOR INSURANCE BUT KEEP THE PROOF

The organization of the Tour de France by the hand of its general director Christian Prudhomme, together with the International Cycling Union, announced yesterday the postponement of the queen cycling event to 29 August and extending until 20 September.

This is a decision that was already being considered and which gained strength after the statements made on Monday by French President Emmanuel Macron in which he announced that all large-scale events would be canceled or postponed until mid-July. Now, with the Tour of France initially scheduled to start on 27 June this made its accomplishment simply impossible and the organizers have now made the decision to keep the event, but at a later date.

According to the official announcement of the Tour de France, this decision was made after conversations with all stakeholders from cyclists, to teams, through organizers and sponsors, and ultimately, the UCI. With this decision, many World Tour teams will have breathed a sigh of relief as they depend heavily on their exposure during the Tour de France to ensure their survival and the respective maintenance of their current sponsors.

Aware of the importance of the event for cycling, it was with some relief that we registered the opening of the UCI for the rescheduling of the event for the end of August, thus allowing a return to training and competition for the greatest cyclists in the international squad with a view to participating in the mythical Tour de France for more than four months.

But as it is detailed in a piece of the newspaper ‘El Mundo’, nothing makes sense in international cycling without the Tour de France, so the Tour of Spain also needs to be readjusted to make it possible for the three big tours to go on the road this year.

And with the Giro D’Italia potentially taking place in October, the Tour of Spain should end a very strange season, but which, it seems, will maintain its three most important competitions, in addition to the World Cycling Championships that should take place immediately after the end of the Tour de France.

Confused? And me too. Hopefully, this ‘cluttered’ schedule that has been designed can at least be applied in part, as this would mean that we would have some cycling by the end of the year.

FUTURE OF THE TEAMS CONCERNED

Cycling teams are highly dependent on their ‘sponsors’ who bet on their teams ’media exposure to promote their brand to the viewer. Now, if we did not have the three Great Laps in 2020, most sponsors could lose interest in sponsoring their teams and this would jeopardize the survival of a large part of the large and small teams in the international squad.

It was also with this in mind that the organization of the Tour de France never threw the towel down, warning that it would do everything to protect the interests of the sport without neglecting the health of athletes and spectators.

With the prospect that at least the Tour de France and La Vuelta will hit the road by the end of the year, most of the teams will have breathed a sigh of relief and set to work in order to outline a new preparation schedule for their best athletes with a view to reaching these great events in the best possible way given the circumstances.

RETURN TO PORTUGAL CAN WIN WITH RESET

Interestingly, the Volta a Portugal – scheduled for July 29th and until August 11th – could be lucky by chance since it should be able to go on the road in normal conditions.

If this is possible, and taking into account that the Tour de France starts at the end of August, there is even the possibility that some cyclists may participate in the national competition in preparation for the Tour de France, thus increasing the media exposure of the largest national cycling event. All of this is just guesswork these days, but looking at the subject in some depth, that hypothesis may even gain traction.