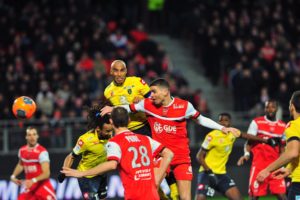 Friday evening, Sochaux moves to Valenciennes for a meeting of the 25th day of Ligue 2. Valenciennes is aiming for a place in play-offs like Sochaux.

Unlike last year, the Valenciennes should not give cold sweats to their supporters since the club is far ahead of the red zone. On the contrary, they are only 6 points from the play-offs and can always hope to grab a place. However, after winning against Le Mans (1-0), the Northerners remain on 3 average performances with two draws against Rodez (1-1) and Guingamp (0-0) and a defeat conceded in Clermont Friday evening (3-1 ).
For his part, Sochaux is 10th in the ranking and is 3 units behind his opponent of the day. After having been rather exciting at the start of the season, Omar Daf’s men have significantly reduced the airfoil by lining up 9 consecutive games without winning a single match. Recently after losing to Auxere (2-1) and Lorient (0-4), the Doubistes took a point in Nancy (1-1) before dominating in pain Le Mans last Friday (1-0).

The staff for Valenciennes vs Sochaux

On the northern side, the important Dabo and the less used Fedele, Boutoutaou, Quenum and Linguet are still on the floor. On the other hand, the titular goalkeeper Prior will return after having served his suspension against Clermont. At the front, we find the successful Chevalier, author of 12 league goals this season.
Sochaux should make the trip without the important Kaabouni and the promising Moltenis who are both in the infirmary while the defender manager Diedhiou will be suspended after receiving a red card against Le Mans. Last week, striker Sané brought his total goals to 9 this season in the league.

The probable compositions for Valenciennes vs Sochaux:

Key points for the match Valenciennes vs Sochaux

There was no winner in the first leg (0-0).
Sochaux has won only 2 away games this season.
Valenciennes have won 4 in their last 5 games in Hainaut.

Sochaux remains a fragile team which could experience a new setback in the field of a Valencian team often performing at home.