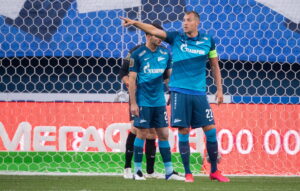 This Monday, Zenit receives Arsenal Tula on behalf of the 7th day of the Russian championship. Both teams want to win this match. Zenit to eventually take the lead in the championship and Arsenal Tula to breathe new life.

Winner hands down in the last Russian championship with 15 points ahead of Lokomotiv Moscow, Zenit Saint Petersburg is the big favorite to its succession. But at the start of the season, Malcolm’s partners do not occupy the head of the Russian championship after 6 days. The fault of Spartak made a better start but also the fault of Zenit who lost once this season on the lawn of Dynamo Moscow (0-1). After 4 victories in the league, the Zenithians are doing much less well since just after this defeat, they conceded the division of points at Lokomotiv (0-0). Zenit is 3rd with 13 points.

Opposite, Arsenal Tula is currently 14th (out of 16) in the Russian championship. It must be said that the Cannoniers are playing heavy at the start of the season. After a defeat against Krasnodar (0-2), Arsenal Tula won at home against Dynamo Moscow (2-0). Then, the club conceded the points split at home against Khimki (1-1) before losing narrowly against Spartak Moscow (1-2).

The home side will have to do without the services of starting goalkeeper Andrey Lunev as well as incumbent left-winger Sebastian Driussi. Promising youngster Leon Musaev is uncertain. The one who is nicknamed the Iranian Messi, Sardar Azmoun is the club’s top scorer with 4 goals this season. The captain of this team Artem Dzyuba, however, scored only one goal. By the way, we can note the reinforcement of Dejan Lovren in the central axis of the team this summer.

Opposite, the visitors will be deprived of the center forward of this team Evgeniy Lutsenko. Also, the potential holders Denisov, Belyaev, and Kovalev are uncertain. Arsenal is relying heavily on their two Zambian players, brothers Kings Kangwa and Evans Kangwa. The first named has delivered 2 assists this season for a goal.

Coaches have the possibility of making 5 substitutions during the game.

At home, Zenit has ample means to bring down this Arsenal Tula team. Zenit victory!